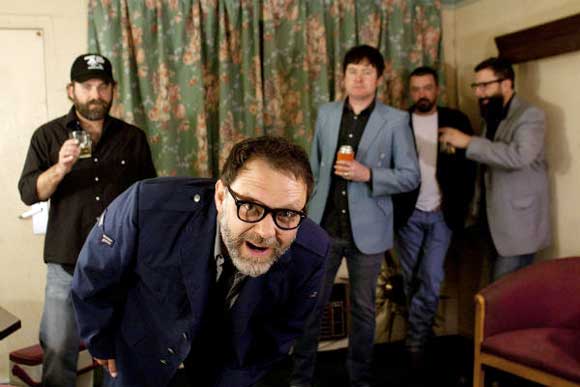 Mic Harrison and the High Score are gathered for a photo shoot at what has to be the nastiest motel in Knoxville, Tenn. The wallpaper is stapled to the wall. Stains stretch from floor to ceiling. Behind the beds is a filthy little alcove with a grungy sink and a rotting cabinet. When the photographer picks up her beer up from the dresser a roach has already beat her to the next sip.

"The online review said 'If you like to cook meth you'll love this place!'" says High Score guitarist Robbie Trosper.

"The homeless shelter we stayed in last week was a paradise compared to this," says High Score bassist Vance Hillard.

To be honest, the group members didn't realize that they were being a put up in a homeless shelter until they'd been there a while and just a few months earlier the band bunked at a $700,000 townhouse in Columbus, Ohio, where dignitaries usually dwelled.

Such is the life of a working class rock band: Sometimes you sip from the same bottle of Scotch as Jeb Bush. Sometimes the roach beats you to your beer.\r\nIt's the sort of thing Mic Harrison knows well. A native of Bradford, Tenn., Harrison was working in a sawmill when he was asked to join Knoxville-based band the V-Roys in 1995. The group had already been performing Harrison's song "Sooner or Later" with V-Roys co-lead vocalist Scott Miller singing lead. The group recorded three critically-acclaimed albums and toured Europe opening for Steve Earle and acting as his band. When the V-Roys broke up on New Year's Eve 1999, Harrison (who had released his first solo album "Don't Bail" earlier that year) joined already established college radio favorites Superdrag. He recorded the album "Last Call for Vitriol" with the group. Superdrag disbanded in 2003 and Harrison recorded his second solo CD "Pallbearer's Shoes" (2004) with producer Don Coffey Jr.

It wasn't till Harrison joined forces with Knoxville band The High Score, though, that everything came together. Robbie Trosper (guitar), Brad Henderson (drums) and Vance Hillard (bass), all hail from Sevier County (the birthplace of Dolly Parton) and were kindred spirits. Together, Harrison and the High Score developed a combination of high octane honky tonk and power pop rock 'n' roll that has wowed audiences from Bonnaroo to Boston.

The band's albums "Push Me On Home" (2007), "On the Right Side of the Grass" (2008) and "Great Commotion" (2010) landed the group good reviews, airplay on Americana radio stations around the country and a dedicated and enthusiastic fan base.

It's music for people who haven't kept up with Lady Gaga's latest outfit or Justin Bieber's new haircut — and maybe a few who do. It's music that relies on strong melodies, lyrics that mean something and invites you to have a good time.\r\nIf that's out of style, Mic Harrison and the High Score could care less.

Back in that nasty motel room the band, which now includes guitarist Chad Pelton, launches into a version of new song "The Colonel Is Dead" for inclusion in the Internet event Couch By Couchwest. A few days later the video will be named one of the picks of the event by USA Today. But tonight the group hits a beautiful harmony in the dirtiest motel room in Knoxville. The final line of the chorus is the title to the band's new album, "Still Wanna Fight."

It's appropriate. For a rock band in 2012, every tour seems like a battle and every show that ends with a cheering crowd is a victory.

After the photo shoot, Harrison looks out into the darkness of the motel parking lot and puffs on a cigarette:

"Yeah, and we've got an arsenal of songs and we know how to use 'em."