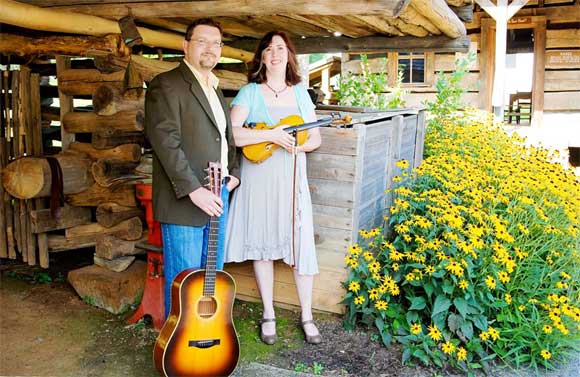 One good thing about music, when it hits you feel no pain — so sang reggae legend Bob Marley.

It's little wonder, then, that Jeff Barbra and Sarah Pirkle sing, write and play music like their lives depend on it. On one hand, they do: It's how they pay their bills, whether through songwriting royalties or Pirkle's lessons or the various gigs they play around East Tennessee.

On the other, it's how they endure. Like most folks, the husband-and-wife couple, who call rural Blount County, Tennessee, home, have experienced their fair share of struggle and sorrow. From spiritual storms to literal ones, they've fought back against financial hardship, health battles, the tragedy of miscarriages and a tree that fell through the middle of their home, and they've done so the only way they know how: By picking up their instruments and pouring every ounce of hurt into the mournful mountain ballads, traditional country weepers and lonesome folk ballads that make up their repertoire.

The two have been together since meeting at a music store in Maryville, Tenn., where Pirkle was a young fiddle teacher.The young couple bonded over music. They found instant musical chemistry when they played together, and by 1997, they were married. Over the past several years, they've made inroads into the local grassroots scene, first through the WDVX-FM program "Behind the Barn," a live broadcast they hosted for years.

They started cutting albums together — "Dog Years" in 2000 and "The Barb Hollow Sessions" in 2004; Barbra released a solo album, "Country Music for Country People," and cut one album with local honky-tonk outfit The Drunk Uncles. Pirkle teamed up with some amazing local ladies and played in groups like the Maid Rite String Band and the Naughty Knots, and she released her solo album, "Walking Tall Through High Weeds."

And while those albums, rich with life and love and joy, reflect the good times and good friends that made those early years almost carefree by comparison to the last five, the mournful moments upon them were a portent of the times to come.

They fought through the grief of multiple miscarriages, resigning themselves to childlessness, and even made peace with it through another album – "Family Singing (The Gospel Collection)." They got right with God, not in a repent-ye-sinners sort of way, but in a deeply personal relationship that's as reflective of the spiritual connection they have with the land upon which they live and each other as it is of anything religious. They made connections with Knoxville radio station WFIV-FM, i105, and today they host "In the Spirit," a Sunday radio show.

Life, it seemed, wasn't quite done with the body blows. In January 2013, a freak winter storm sent a huge tree on the hillside above their home through the roof, effectively cleaving their house in half. They weren't injured, but their lives were upended, and for the next several months music took a backseat to the salvaging of what meager possessions were undamaged and relocating to a new house. But just as the sun came out after that horrific night, so it seems to be shining once again on their lives.

They're now hosting a weekly live radio show in partnership with WFIV at Barley's Maryville – "Behind the Barn," which follows the same format as it did on a previous station. Their accomplishments – winning first place in the Chris Austin Songwriting Contest at Merlefest; writing tunes that have been covered by a variety of artists, including Terri Hendrix and Lloyd Maines, John Starling, Rhonda Vincent, Charlie Sizemore, Blue Moon Rising, Gary Ferguson and Sally Love, Rickie Simpkins, Dale Anne Bradley, Carrie Hassler, Darrell Webb, Ernie Thacker, and more.

More importantly, they're preparing for the next step in their own musical journey, writing songs and culling through the best to assemble the next Jeff Barbra and Sarah Pirkle record. They may even get out of the hollow this time to make it, adding a little Nashville pizzazz to the down-home sound that friends, family and fans have come to know and love so much over the years.

Music — when it hits, you feel no pain. Or at least, in the case of Jeff and Sarah, when they play, the pain is lessened ... for themselves, and for others. The bad times aren't as difficult to endure, and the good times are all the more joyous. Life will always throw curveballs, ones that knock us all on our backsides from time to time, but like the hard-working men and women who populate the stories they tell through music, Jeff and Sarah know that the best therapy is to pick up that guitar and that fiddle, to hold one another tight and to keep on playing.\r\n...Steve Wildsmith, Maryville Daily Times

Thanks for visiting and see y'all soon.
-Jeff and Sarah